Colorado. "Round up" on the Cimarron, a photochrom print from c. 1898, showing one of the large musters of cattle done in the days before barbed wire, fences, and easy access to transport ended the necessity for the practice. This is almost certainly in the town of Cimarron and the river on the left is the Cimarron River.
The roundup is an iconic image of the Old West: the gathering of cattle in the open range, followed by them being driven vast distances from ranches to distant railheads over a period of several weeks. Due to the time and distance involved, not only did livestock and cowboys have to endure rough terrain and extreme weather, herds were also at risk from theft, hunger and disease.
In the 1830s cattle driving became a steady occupation.
In 1867 the Goodnight–Loving Trail opened markets for Texas cattle in Colorado and New Mexico.
A photochrom is a colorized image produced from black-and-white photographic negatives.
SOURCE: Wikipedia
No comments: 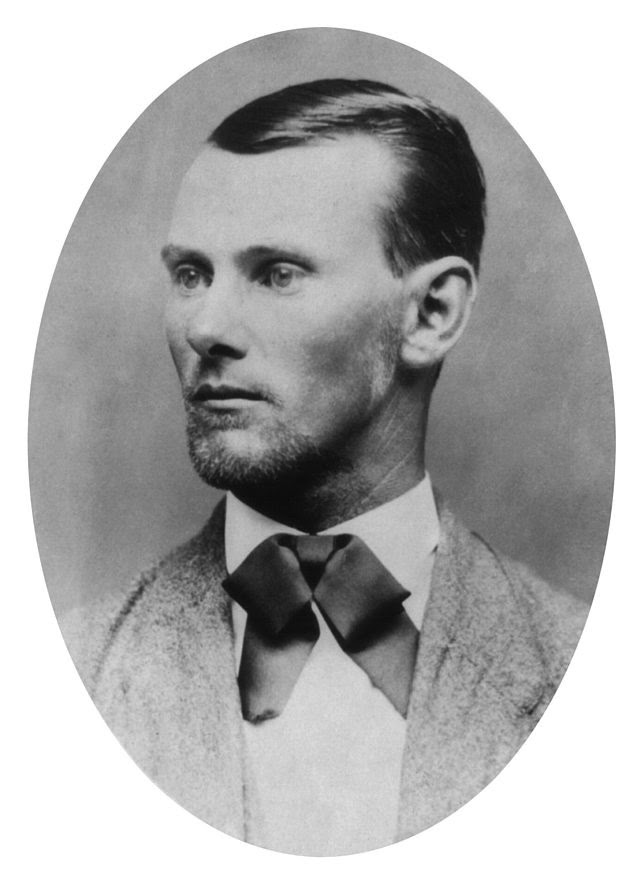 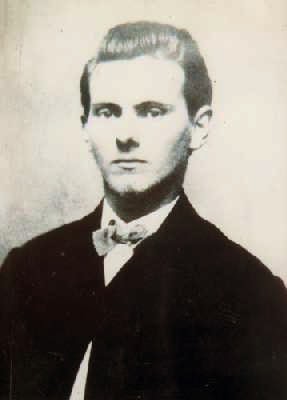 His Early Life:
Jesse Woodson James was born in Clay County, Missouri, USA on September 5, 1847.
He had an older brother, Alexander Franklin James called "Frank", and a younger sister, Susan Lavenia James. His father, Robert S. James, was a farmer and Baptist minister in Kentucky. His mother was Zerelda Elizabeth Cole from Woodford County, Kentucky.

The Civil War Years:
The American Civil War (1861 to 1865)  to determine the survival of the Union or independence for the Confederacy of the south. The James brothers were both in the Confederate guerrillas, called the Bushwhackers, in 1863, when Jesse was only 16 years of age, under "Bloody Bill" Anderson's group. This group was accused of participating in atrocities against Union soldiers, including the Centralia Massacre in which Bushwhackers killed or wounded some 22 unarmed Union troops. It was during this time that Jesse James learnt the horse and pistol skills that would make him a legend.

After the war:
Starting in 1868 at the Liberty Bank, Missouri, Jesse and Frank James began robbing banks, stagecoaches and trains, and by 1868 became part of the "James–Younger Gang" with Cole and Jim Younger. An 1869 robbery marked the emergence of Jesse James as the most famous of the former guerrillas and the first time he was publicly labeled an "outlaw," when the Missouri Governor set a reward for his capture. The gang dissolved in 1876, after the capture of the Younger brothers during an attempted robbery of the Northfield First National Bank. Three years later, Jesse James organized a new gang that robbed banks, trains and stagecoaches in Missouri, Kentucky, Iowa, Texas, Arkansas, Kansas, and West Virginia.

His Death:
He was shot in the back of the head on April 3,1882 by one of his own gang members who wanted to collect the reward money.﻿﻿

SOURCES:
Official website for the Family of Jesse James

James Butler Hickok (27 May 1837 -2 August 1876) better known as Wild Bill Hickok, was a legendary figure in the American Wild West. He is remembered as a gunfighter, gambler and lawman. 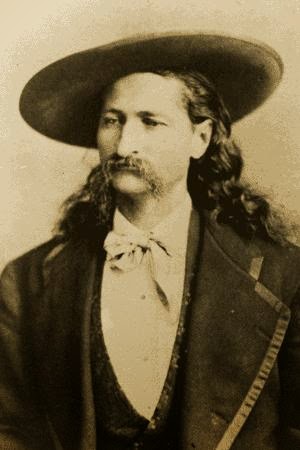 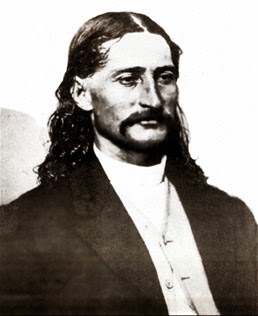 ﻿
Born and raised on a farm in Illinois, his parents were William Alonzo and Polly Butler Hickok.  James Hickok went west at age 18 as a fugitive from justice. He had many jobs: a stagecoach driver, a lawman in the frontier territories of Kansas and Nebraska, a soldier in the Union Army during the American Civil War, a war scout, marksman, actor, and professional gambler.
Hickok was involved in several notable shootouts. He was shot from behind and killed at the age of 39 while playing poker in a saloon in Deadwood, Dakota Territory. The card hand he held at the time of his death (aces and eights) is called the "Dead Man's Hand".

Wild Bill Hickok: The Man and His Myth

Find out more about him here: 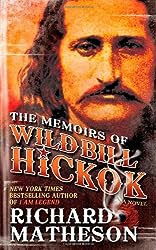 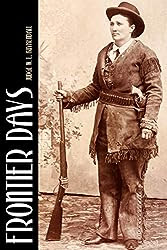 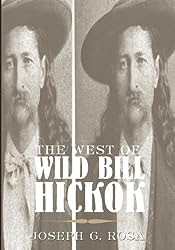 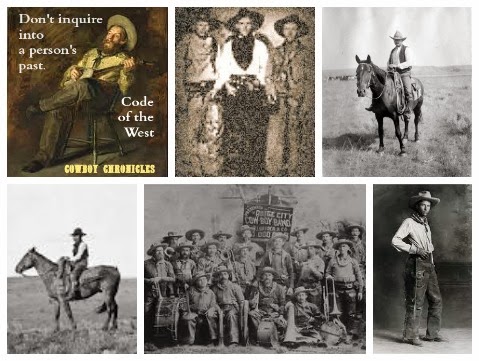 Howdy. They call me Clay. If you ask me it was interesting times and though I'm not much of a talker I'll tell the story any way about the cowboys.

These here Cowboy Chronicles refers to the part of American History called the Old West, Far West or Wild West, I just call it home.

It is seen through the eyes of Clayton Virgil Kane 1859 - 1919. It is made up of the people, history, lore and culture around the time of the American Civil War (1861 to 1865) to just after the end of the 19th century. Clay's hero was Daniel Boone and, so of course, it includes Boone (1734 to 1820) as an influence and forerunner of the American cowboy.

I hope you enjoy reading and learning about this great part of American history.
You might like to start with:

A photograph of the Ox Teams resting in the main street of Sturgis, Dakota Territory.
The photograph was taken by John C.Grabill and is dated to between 1887 to 1892.

You can see the line of oxen and then the wagons.
From Library of Congress Prints and Photographs.

An ox wagon was used to transport goods. It was a wooden wagon with four iron covered wheels, pulled by teams of oxen, that were harnessed to the wagon in pairs. Most of the wagon was covered in canvas in a high arch to protect the goods.
3 comments:

Email ThisBlogThis!Share to TwitterShare to FacebookShare to Pinterest
Labels: 1888, 1890, 1891, photograph

Email ThisBlogThis!Share to TwitterShare to FacebookShare to Pinterest
Labels: Boone 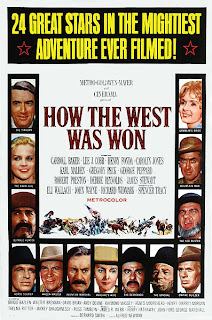 Do you have a favorite cowboy movie? Did it make the list below?

When I think back the first thing that really got me interested in cowboys and the ways of the west was my granma taking me to see an amazing movie which was set in the old west when I was very young. She may have taken me to it because she wanted to see it or because back in those days there were not many movies for kids or maybe she actually thought  I would like it but anyways I was young and impressionable and hence my live long love of all things cowboy and cowgirl. To this day I do not remember the movies name just the panoramic scenery, a few scenes like when an army guy has his leg amputated and I can hum a few bars of the film score but not so that anyone else can recognize it. I would love to know what movie it was.

SO MANY MOVIES SO LITTLE TIME
Of course this is the list of movies I have seen from the 1960's - there are hundreds more made in the 60's let alone before and after that. Here are a few that I am looking forward to finding and watching:
Charro! Directed byCharles Marquis Warren Elvis Presley, Ina Balin because Elvis is in a traditional western.
TepepaDirected byGiulio PetroniTomas Milian, Orson Welles because of Orson Welles.
If You Meet Sartana Pray for Your DeathDirected byGianfranco ParoliniGianni Garko, William Berger because of the title.
Lonesome CowboysDirected byAndy WarholJoe Dallesandro because of the director.
One-Eyed Jacks Directed by Marlon BrandoMarlon Brando, Karl Malden because of Brando both directing and starring in it.
Go Kill Everybody and Come Back Alone because of the title!

Going off to watch Django Unchained... oh by the way did you know there is a 1967 movie called Django, Kill... If You Live, Shoot!

Email ThisBlogThis!Share to TwitterShare to FacebookShare to Pinterest
Labels: cowboy

What do Cowboys eat from the chuckwagon? 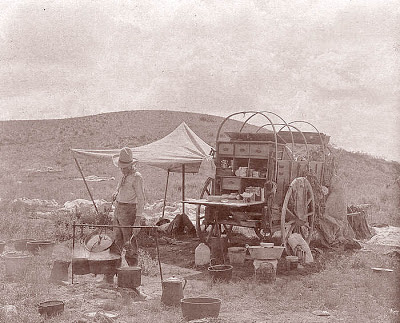 This is a nice picture of a cowboy cook with his chuck wagon. The photograph was taken in 1907 on a Texas Ranch. I don't know if you have ever had the chance to eat real cowboy cooking, but let me tell you that it is really good. I grew up on West Texas cowboy cooking. Cowboy food is not about living long, but living large. A chuckwagon like this one would likely be cooking up buttermilk biscuits prepared in a dutch oven on a campfire, beef, lamb, and goat slow cooked over oak coals, hard cured hams, pinto beans, cowboy coffee and even peach cobbler. The food is typically high fat, and high salt. You can bet that this cowboy is not serving up a salad with the meal he is preparing.

FROM OLD PICTURE OF THE DAY
2 comments: 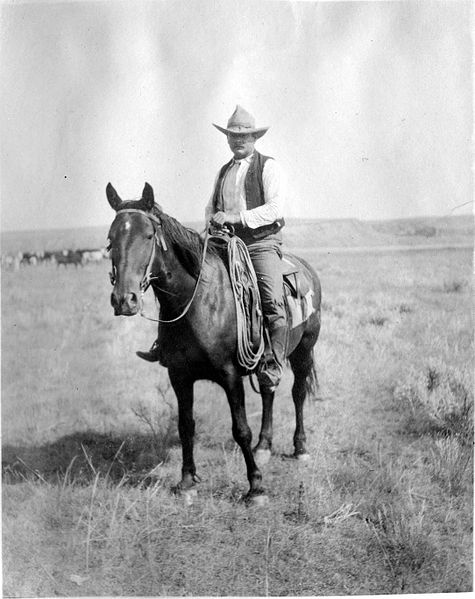 What did cowboys eat on the range?


These cowboys are eating out of cans. Canned tomatoes and canned peaches were cowboy favorites on the range. They probably got sick of beans...cowboys ate a lot of beans, dried beef, buffalo or pork and more beans. Dried meat was called Jerky which was a way of preserving the meat so it would last. It was made and eaten by Native Americans as well as the cowboys of America.

In 1866 the first chuckwagons started moving from camp to camp feeding the cowboys. Find out more about what food was served to the cowboys from the chuckwagons here.

Are the true cowboy ways fading?

Code of the West.


LINKED UP AT: History and Home Link Party

THE LIFE AND THE TIMES OF CLAYTON VIRGIL KANE

They call me Clay. If you ask me it was interesting times and though I'm not much of a talker I'll tell the story any way about the cowboys. 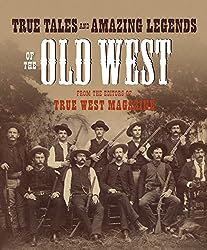 refers to the part of American History called the Old West, Far West or Wild West. It is made up of the people, history, lore and culture around the time of the American Civil War (1861 to 1865) to just after the end of the 19th century. It is seen through the eyes of Clayton Virgil Kane 1859 - 1919. Clay's hero was Daniel Boone and, so of course, it includes Boone (1734 to 1820) as an influence and forerunner of the American cowboy.

Find out more about MY HERO

The humble and adventurous Daniel Boone who lived from 1734 to 1820. I even named my son, Israel, after his

THE BEST THING THAT EVER CAME TO TOWN 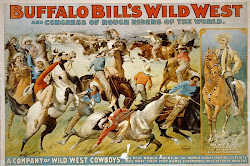 Code of the West. 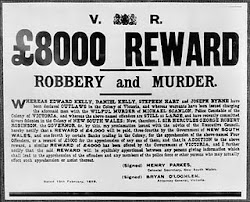 This is Ned Kelly's reward poster 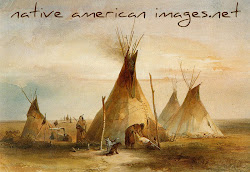 Please consider a small donation to support this site.